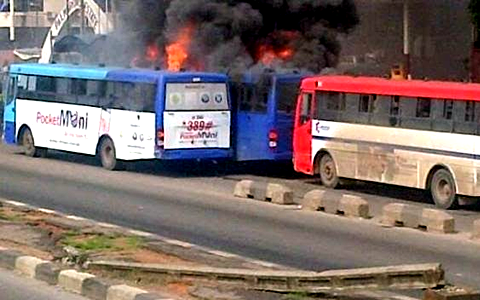 The LAGBUS Asset Management Ltd., operators of LAGBUS, on Friday withdrew its buses from the roads following the burning of some of its buses by aggrieved persons.

Mr. Abiodun Apata, Project Manager, Mutual Model Transports, one of the LAGBUS Franchises, made this known to the News Agency of Nigeria in Lagos.

The buses were allegedly attacked by soldiers, who were protesting the killing of an army corporal.
The corporal, belonging to the Nigerian Army of Education was allegedly hit by a BRT vehicle while he was riding a motorbike near the Palmgrove Bus Stop on the Ikorodu Road, Lagos.

Apata told NAN that the attack was unfortunate, saying that the luxury buses were withdrawn to avert more damage.

“By 10pm yesterday, one of our buses broke down at Onipanu, by 11pm, a rescue team with a van went to the scene to tow the bus.

“Unfortunately, area boys started stoning our team which made our men to leave. Meanwhile, the driver put on hazard lights and C- Caution to alert motorists of the breakdown.

“By 5am today, before the rescue team got to the scene, a corpse had been deposited in our bus and a motorcycle parked behind it.

“When we saw it, we reported the case to the Pedro Police Station, Somolu, but before we got back to the scene, soldiers had burnt down five BRT buses and one belonging to LAGBUS”, he said.

The Head of Operations of BRT, Mr. Johnson Oguntade, also told NAN that the withdrawal of BRT vehicles was to prevent more damage.

He said that the deceased soldier was not hit by a BRT vehicle.

“I do not still understand why we are suffering for what we never caused. Why they are burning our buses is not known”, Oguntade said.

The News Agency of Nigeria (NAN) reports that the alleged accident and withdrawal of the luxury buses left thousands of commuters stranded and crippled commercial activities on Ikorodu road.