Football: “Tears of an Hypocrite mocking the innocent Smoker” 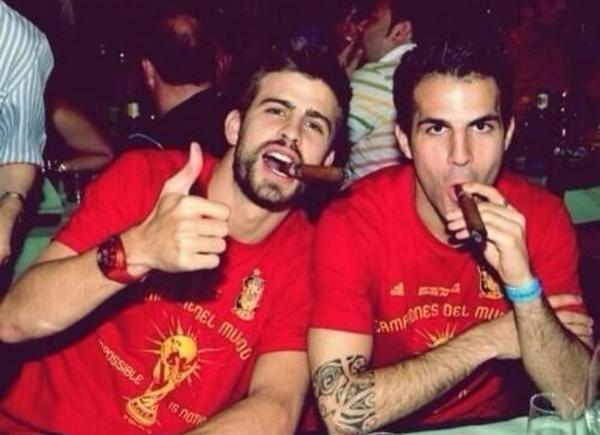 Fabregas and Pique smoking it out

I read an interesting article by Yomi Odonuga of the Nation newspaper. In his weekly column, he explained that a National visit from Malala Yousafzai, the young rights for women education activist who escaped death by the whiskers, spurred President Goodluck Jonathan to re-awake the search for the ill-fated Chibok girls from its slumbers.

It was a visit, that he described a turning point, hopefully.

Make no mistake, Malala’s inspiring words to Jonathan to find a means of rescuing the abducted girls is no different to the cries and protests from the average Nigerians on the streets. The only difference however is, she is seen as a symbolic figure who’s currently in the World of what she preaches. Hear her:

It correlates proficiently with the BringBackOurGirls campaign and its no surprise she was given the utmost attention.

Indeed, it makes you cringe when folks who don’t practice what they say, believe they are in the best position to make a statement, that in the end makes them retarded.

Arsenal’s Jack Wilshere was caught smoking at a club in Vegas, even though the England international initially denied allegations that he’s a smoker.

With Football’s stupendous growth in the 21st century, you are forced to agree with Jose Mourinho on this:

‘If they smoke, maybe the kids think they do it a lot of times and they will probably do the same.’

If the kids could idolize Wilshere’s unforgiving act, imagine what they have learnt under the tutelage of the special one?

Mourinho, in one of the famous Elclassico games, poked the late Tito Vilanova in the eye.

In that vain, maybe if you poke people’s eyes in the full glare of the mighty audience, maybe the kids would see no big deal in poking people’s eyes since the adults do it, and they will probably do the same to their teachers.

Make no mistake I don’t condone Wilshere’s smoking antics. Infact, its perplexing why Sportmen see the fun in drinking and smoking.

Yet, we have seen Jack Wilshere display disgusting tantrums in the past, that you have to be reminded of his age to forgive him.

But as he’s grown older, he’s gotten wiser and matured.

A full illustration was Paul Scholes infamous rant about his dire development. Instead of blowing out of proportion, the 5 ft 7 Midfielder first acquiesced, then requested a private meeting with his critic, in a way of accepting criticism and learning from them.

So when Jack is coming under scrutiny for an incident like this, it shows that people are more concerned about the negative side of a footballer.

Jack Wilshere has been a stalwart in his endeavors for both club and country. His fighting spirit and enthusiasm to win every ball is an effulgent watch on match-days. But as Tim Stillman of Arseblog noted, an exciting prospect becomes boring sooner than you think and people began to fault and blame everything exciting about you.

Chelsea’s John Terry was involved in a crazy scandal that would have tarnished the reputation of every famous personnel. But he still remains a legend and captain, and on the pitch delivers- So did Ryan Giggs, who was involved in an ignominious family 3some (Eh).

Bothering about the lifestyle of a footballer who didn’t smoke on the pitch, besides the pitch or perpendicular to the pitch is like beating a dead horse.

Its an arduous task to expect Footballers to be disciplined when they are not doing their jobs.

I remember a friend asking to compare Suarez’s biting incident to Wilshere’s, since the England international has been caught once with a cigarette.

The difference is one took place while on sacred duty.

After his racist remarks on Patrice Evra which frankly happened on the pitch, Luis Suarez stayed and guided Liverpool the next season to a Uefa Champions League berth, scoring scintillating goals in the process, amid the racist and subsequent biting of Ivanovic, the faithful sang his name and cheered his goals that season.

As long as Wilshere remains fit and ready for next season and contributes immensely for his club, a smoking incident on a night in vegas is irrelevant.

The faithful are not fully concerned about what takes place outside, especially if its a negative escapade scenario. Rather on the pitch is the sanctuary where you are required to display your bits and stay disciplined, that is where the true audience are.

Emmanuel Frimpong had a crazy banter off the field. His teenage tantrums were fancied by many, but failure to match that feat on the pitch lead to his extinction.

Should Vermaelen be sold?

After Arsene Wenger refused to guarantee the Belgium’s future, there are rumors flying around about a potential move to Manchester United.

Vermaelen has been a patient disciple.

Its an excruciating watch when you the captain and forced to sit on the bench and watch others do your job better. Yet, in his few cameos last season, the defender has always given 100percent and has never shown any sign of a trite.

But if he’s eventually sold, who would replace him?

The Merteshacker and Koscienly bond is certain to take center stage again next season. That logically implies that if Arsene Wenger is planning on bringing in a defender, it has to be a schandefruede-guy who is aware of his assured limited chances, but needs to pray somebody gets injured.

And realistically, no top quality central defender would be prepared to sit on the bench, unless Wenger is prepared to bargain for an unknown 18-year old from Boca Junior.

Heard people suggest Jenkinson in that position. But his frail nature doesn’t permit, and not really a stats guy, but am sure his aerial conversion rate is low.

Much awaits to be seen on the Big Boss next move.