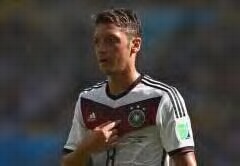 Mikel Arteta has come out to defend his team-mate who has come under heavy criticism by people who feel he’s been poor at the World Cup. Information Nigeria understands.

The German international came under scrutiny for his performances particularly against Algeria by a former Germany legend.

A scathing article by Martin Samuel of Dailymail, revealed the player had a poor outing in the annihilation of Brazil, suggesting he was not needed in the encounter and was invisible.

But Arteta thinks the criticisms are over the top.

“It’s been over the top because Arsenal don’t usually spend that kind of money, so expectations are really high.

“He’s never been in that situation before but he coped with it really well, he took it on the chin, he tried really hard and he was always in a position to help the team.

“People forget how well he started and how many good moments he gave us during the season.

“People want to pick out the bad ones, but everyone has bad ones. When you cost £40m, people look at you with different eyes.

“Mesut is really relaxed. He’s been under big pressure, but hopefully next season he can be even better for us.”