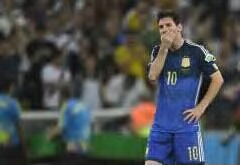 Argentina coach Alejandro Sabella has insisted that Lionel Messi deserved to be awarded the Golden Ball, adding he is among the ‘pantheon of greats’ despite his failure to win the World Cup in Brazil.

Messi was unable to emulate Diego Maradona’s achievements in 1986 of carrying Argentina to World Cup glory as the South Americans were beaten 1-0 by Germany in the World Cup final at the Maracana on Sunday.

The Barcelona striker was still awarded the Golden Ball as the tournament’s best player and Sabella believes he deserves it and will still be considered among the greatest players in history.

“I believe he is already in the pantheon of greats. He was there before the tournament and he’s been there for a while,” Sabella said in his post-match press conference.

“I think he deserved the Golden Ball. He played an extraordinary World Cup. He was a fundamental factor in getting us to the final. I sincerely believe he deserves it.”

Sabella is expected to resign from his position as the Albiceleste coach in the wake of the World Cup but he refused to be drawn on his future as he spoke of his pride in the players.

He added: “I can’t speak about my future now. I don’t know what to say about the future.

“What I want to do is rest, spend some time with the players and my family. I need to rest for a couple of days and then I will see.

“I’m very proud. It has been an extraordinary World Cup, the boys gave their all and did everything for the Argentina shirt and the group.

“They can look each other in the eyes and say they gave everything. They were warriors. They left every last drop of sweat on the pitch.

“The players deserve a wonderful welcome back in Argentina because they played a wonderful World Cup.”{GOAL}