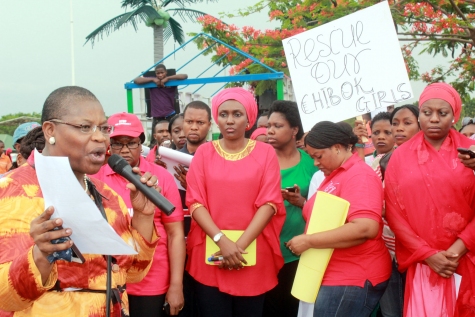 Security operatives at the presidential villa, Abuja, on Sunday, prevented the BringBackOur Girls group from entering Aso Rock, where the seat of power is located, as they barricaded the entrance.

The BBOG is an advocacy group dedicated to drawing and sustaining attention on the fate of over 200 Chibok Schoolgirls abducted on April 14, 2014 by Boko Haram insurgents.

The BBOG group had marched during an impromptu protest to the villa to further highlight the issue of the Chibok girls, who are still being held captive 82 days after their abduction.

The group, which organised the protest in the middle of its 68th sit out, stated that the continued stay of the Chibok girls in the hands of the sect members is no longer acceptable and hence, the need for the march.

Members of the group, who were worried that the girls were still being held in the dreaded Sambisa Forest, started singing solidarity songs until their leaders came back with the report that their message will be conveyed to the necessary authorities as no one was on ground to attend to them.

“The people here said the ministers or any other senior officer were not on ground to speak with us. They have collected our numbers and have promised to convey our message to their superiors. They promised to get back to us”, the group added.

The BBOG, which expressed indifference to the outcome of the protest, however, noted that its members will continue to sit out and protest until the girls are rescued.