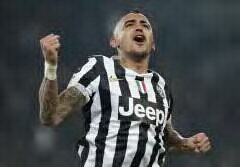 Arturo Vidal has ruled out a move to Manchester United but says he does not know if he will stay at Juventus.

Goal understands Manchester United were preparing a €54m bid for the Chile international after new manager Louis van Gaal approved a move for the 27-year-old.

However, Vidal now appears to have ended any chance of a switch to Old Trafford by insisting he will not move to Manchester, although he admits he could still leave Juventus.

“I don’t know if I will stay at Juventus, I’m happy here in Turin,” he told Sky Italy.

“I will talk with Allegri on Monday. I’m not going to Manchester.”

The Turin side have previously insisted they do not want to be parted with their key men, Vidal or Paul Pogba, but warned a large bid would have to be considered.

“Our strategy is clear; we want to keep all our best players, including Vidal and Pogba,” Pavel Nedved told Tuttosport. “We don’t want to sell anyone, especially Vidal.

“Certainly, if there were a high bid for them, we’d have to think about it but we don’t want to sell our champions.

“We want to be competitive in the Champions League and the only sales are to be players who are not part of our plans.”{GOAL}