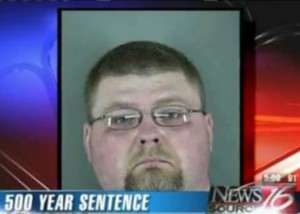 This sentence is very well deserved. A judge in Oregon recently sentenced a nasty man who raped two little boys to 500 years in prison, she felt the details of this crime were the most disgusting things she had ever heard in her entire life.

The man who raped these two little boys goes by the name of Shane Michael Emory, who happens to 38-years-old. He previously plead guilty to 10-counts of first-degree sexual abuse, four counts of illegal sexual penetration, and eight counts of sodomu. This nasty man also sent the photos and videos of the rape to other guys email addresses, according to reports.

The prosecutors in Orgen said that this is the longest sentence in their history.

“It’s the worst case I’ve ever had,” said prosecutor Stephen Morgan. “It was a case where he sexually molested these kids, one of them from the time it was at least three months old for about three years or almost four years.”

He said in court that he may have “screwed up” the little boys by raping them, but he didn’t show any type of remorse.

Morgan said that Emory was bold enough to say he molested the children over a period of 2-3 years and that he did it to make their lives miserable.

Vogt told Emory in court that his long sentence is to give him enough time to reflect on what he did to these children’s lives.

“This is one of the most heinous cases I have ever seen, and I must tell you I have seen a lot of bad cases in my 20 years here,” she said. “This is the worst one I’ve seen.”