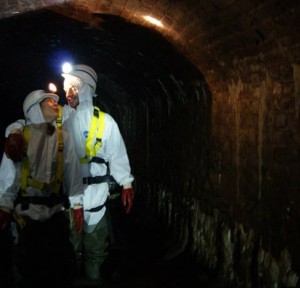 It’s hard to find a partner with similar interests, especially if you’re into weird things. That’s why I’d say Dan MacIntyre and Dunya Kalantery are quite lucky they found each other. The two lovebirds share an extremely rare and gross hobby – looking at ‘fatbergs’.

If you have no idea what a fatberg is, well, you’re not the only one. The relatively unknown term is used in the UK to describe a great lump of fat, sanitary items and other stuff that doesn’t break down when it goes down the toilet. These deposits are found underground in city sewer systems, and are known to cause problematic clogs.

Fatbergs are exactly as gross as they sound, so it’s really surprising that Dan and his girlfriend Dunya discovered a common interest in them when they got together last year. Well, as they say, birds of a feather… “Like wet wipes and congealed cooking oil, we are inseparable,” Dan wrote to Dunya in what they consider to be a ‘romantic email’.

So when they heard about the discovery of UK’s largest fatberg yet – a massive, 15-ton lump of cooking oil – they knew right away where they wanted to celebrate their anniversary. “We were both fascinated by the story,” said Dan. “Just the mixture of the different substances – the fat, the sanitary towels, and that as an image. It is really gross and we were fascinated in a disgusted way.”

The couple had their first anniversary in May, so Dan surprised Dunya by taking her to see the fatberg. Although the sewers are not generally open to the public, Thames Water Utilities – the company that’s responsible for managing London’s sewers – does run a ‘sewer week’ in May. So it was a rare and lucky opportunity for the couple.

They were both strapped in a harness and lowered down a manhole outside Selfridges, shortly before midnight, on their anniversary. “I was extremely struck by it, and excited,” commented Dunya. “We got to put on white protective suits and waders up to our hips. The sewers were impressive. The current of water was really strong. It was also unexpectedly pleasant down there. It wasn’t that smelly and it was nice and warm.”

Then, the young grease enthusiasts got to see a lot of fat, which Dunya said was ‘great’. There weren’t many giant clumps, as they were expecting, thanks to the sewer workers’ maintenance. But there was a good amount of grease down there to get the couple excited. It was all congealed around the pipes – a result of cooking oil and fat being poured down drains (they shouldn’t be). The fat solidifies around items such as wet wipes and sanitary towels that also shouldn’t be flushed down toilets.

Dunya said that viewing all that fat was an incredibly fascinating experience – she touched it, smelled it and wanted to take some home as a souvenir, but they didn’t let her do that. Dan said he didn’t know what they were going to do on their anniversary next year, but he is going to have to come up with something even better. Hopefully, it’ll be more hygienic.