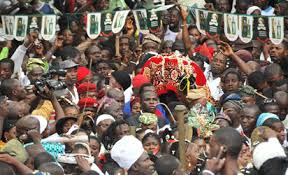 The Osun Osogbo Festival 2014 Advisory Committee yesterday insisted that the Ebola virus does not pose any threat to the celebration of the annual festival.

The Chief Festival Consultant, Mr Ayo Olumoko, said the federal government did not at any time contact organizers of the festival to discuss possible cancellation, hence, it would go on as planned.

Mr. Olumoko noted that only the state government had sought the understanding of Osun devotees and the organizers on the need to put crowd-control measures in place to curtail an outbreak of the Ebola virus.

“The federal government cannot cancel or put Osun Osogbo festival on hold because of the issue of Ebola. President Goodluck Jonathan was here a few days ago to campaign for the candidate of Peoples’ Democratic Party and the Osogbo City Stadium was full of people, without anyone talking about the spread of Ebola. Similarly, the state governor who was the candidate of All Progress Congress had his own campaign at the same Osogbo City Stadium and they were not considering the spread of Ebola there, despite the massive crowd that attended the  rally”, he added.

The consultant argued that any attempt to tamper with the celebration of Osun Osogbo festival would amount to denying the traditionalists their right to religion and freedom of association.

He insisted that the festival must hold as scheduled and that if it is stopped because of the fear of Ebola, it means that “Sallah and Christmas will not hold in the state”.