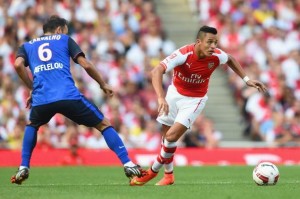 The gunners struggled to create meaningful chances; with Giroud failing to position himself on several occasions. It wasn’t long till they were made to pay when Radamel Falcao pounced on a free-kick to head home.

The second half was equally mundane as the first, and there was no real spark from both sides.

Arsenal though were denied a penalty opportunity when Akpom was brought down in the box, but the officials horrendously awarded a free-kick.