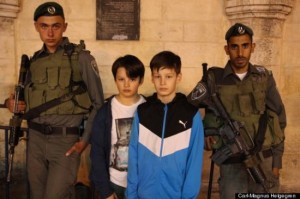 A Swedish journalist decided to teach his two young sons – who were obsessed with war-based video games – what real war is all about. So he took them to visit Israel and Syria to show them the harsh realities that exist in war-torn regions, and make them realise what guns are really used for. The trip lasted 10 days, and when the boys got back, they were completely transformed.

The idea for the trip came at the dinner table one night last year, when Leo, 11, and Frank, 10 begged their father Carl-Magnus Helgegren to buy them the latest Call of Duty game. He was quite concerned with their obsession for the popular shooter – he wondered if his boys actually realized the real effect that war has on its victims.

So Helgegren devised a brilliant plan to impart a much needed lesson. He cut a deal with his sons – if they agreed to travel with him to an area plagued by war and spend time with war victims, he would buy them any video game of their choice on their return.

“I wanted to show them the negative effects war has once the guns and the canons have silenced,” he explained. “The people affected are someone’s father and brother and sister and mother.” Helgregen said that he himself experienced war quite late in his life. “I thought I had a pretty good idea from television, but when I was 29 I realised I had absolutely no idea what war was. And my kids couldn’t explain it, either.”

Leo and Frank didn’t believe their father at first, but agreed to the deal when they realized he was serious. Their mother Elisa, however, was quite reluctant to agree to their deal. Elisa, who is currently separated from Helgegren, was naturally worried for the boys’ safety. “When I presented the idea at first, she hesitated and she said, ‘Is it safe?’” said Helgegren. “But she said she would come along to be there for the children so we both did it together. We did it for the sake of our children.”

Helgegren, who had worked in the Middle East as a freelance journalist, was quick to point out that the trip was neither political, nor related to his line of work. He first considered taking his family to Iraq or Afghanistan, but concluded that they were too dangerous, so he settled on ‘the closest you can get to war on a tourist ticket’.

So the family of four embarked on a 10-day tour of Israel and the Golan Heights in the occupied parts of Syria, in April this year. Their first stop was at Jerusalem where they stayed with an Israeli family, so the boys could get a sense of the local culture. “I wanted them to meet all parts of society,” Helgegren explained.

“Then we went to Shuafat refugee camp where water was at a shortage at the time and they had to go through a checkpoint.” Although the residents of the camp are technically a part of the Jerusalem municipality, they live outside the massive West Bank barrier built by Israel, where facilities are sparse.

Helgegren took Lee and Frank to a clinic at the camp where “kids were being stitched up every single day because they had been hit in the head with the butt of a rifle.” He asked the medical staff there to explain to them what it was like for children to live there. “They were told about three boys who were in wheelchairs after being shot through the spine with rubber bullets. He explained it to them by saying, ‘No more football practice.’”

“I wanted to show them how you can use guns to uphold something. I am not trying to make it a political issue. It is about oppression,” he added. “I don’t like the normalisation of guns. I do not believe in a world without weapons where guns are used as flower pots. But why should children be exposed to guns and violence several hours a day?”

So Helgegren said to his sons: “You don’t see this in the game but this is what you can use a gun for. Guns are being pointed at children your own age.”

During their trip, the family also visited the Mjadal Shams in the Golan Heights – a rocky plateau that has at least 2,000 minefields. They spoke to many young women and men who grew up during the Occupation. Surprisingly, Lee and Frank showed great interest in these stories and began to understand the pain of people who were separated from their families.

“I had to explain quite a bit,” Helgegren said. “I was especially thorough when explaining the politics, and pointing out that the Israeli politics do not necessarily reflect all parts of Israeli society.”

A video clip of the boys at the camp shows them visibly distressed by the surroundings. “Well right now we are in a camp and the police don’t care about what is going on here,” said one of them. “It’s really dirty here and there are a lot of flies. And a lot of rubbish. And people burn their own rubbish in the street because the police don’t care. They sell drugs and they are letting people drug themselves to death. The situation is not so good here. It’s very unfair in this city.”

Helgegren also tweeted photographs of his sons at the refugee camp and standing beside tanks. He captioned one of the images: “Tell the children the truth, as #BobMarley sang.” Unfortunately, not everyone has been able to appreciate the immensity of the lesson he sought to teach. Incensed parents have been sending him aggravated tweets, saying that it the trip was in no way safe for the children.

“I have received messages calling me the worst parent in the world, saying that I am traumatizing my children, that I am a pompous bastard, and that I should be doused in napalm,” Helgregen revealed. “I didn’t really expect such a reaction.”

“These are my children so I do whatever I find to be the best for them. Stop being naive,” was his response to haters. “We went in April when it was not the situation it is now and I had been there twice before and never felt unsafe. If there had been a war I wouldn’t have gone. People who have never been there think people are shooting all the time everywhere. It’s not the case.”

In any case, the boys got back home unharmed and with a lesson well-learned. Upon their return to Sweden, they promptly informed their father that they were no longer interested in the video game that they had wanted so badly before their departure. Instead, they have been displaying an increased interest over the situation in Israel.

“They ask me all the time about the news out there – it has made them aware of a conflict that even many adults do not fully understand,” said Helgegren. “Not everyone has to go to Middle East to teach their children about war games,” he admitted. “But why normalise guns for children? Everybody is playing them and they are part of our children’s lives. Why are parents not making this a problem?”

Helgegren pointed out that he didn’t understand parents who wanted to protect their children from seeing real war, but let them play war-like video games. He also explained that he didn’t think video games themselves were bad. “But in Sweden and Europe we are very privileged. We have all this wealth and rights and social services. And with that comes the responsibility to educate ourselves and not just become zombies playing video games and consuming hamburgers.” Well said!