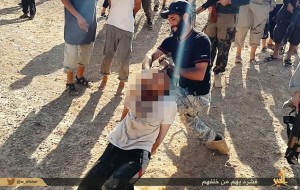 Up to 500 prisoners from the minority Yazidi faith are said to have been killed by ‘death squads’ of jihadi gunmen in recent days.

Some 40 Yazidi children are reported to be among the dead, after being driven from their homes by the brutal Islamist militant offensive in northern Iraq.

Chilling images of the victims have now emerged, some released by the group’s expertly managed propaganda machine.

Advancing Islamic State fighters have filmed themselves massacring prisoners, some of whom have been crucified or beheaded. Pictures show armed fighters, appearing to laugh over slumped bodies of dead civilians, who had been lined up and shot in the head and back.

‘The punishment of those who fight Allah and his Messenger and spread mischief on earth is to kill or crucify or cut off their hands and feet,’ the militant group declared.

There were also reports of children being beheaded, crucifixions and amputations. One said trapped Yazidi women were being raped while their husbands were slaughtered.

As each town is taken, anyone opposing the Islamic State is either killed or given the option to convert to Islam and pay a fine. Others try to abandon their homes and flee. Six weeks ago, the Islamic State executed at least 160 prisoners in just four days in the northern city of Tikrit, publishing pictures of men forced to lie with their hands tied behind their backs while they were shot.

A final set of images showed the victims’ bodies piled up.

The brutal tactics of the group, which broke from Al Qaeda, are the work of leader Abu Bakr al-Baghdadi, who joined the insurgency that erupted in Iraq soon after the 2003 US-led invasion.