Man Pushes Brussel Sprout Up a Mountain with His Nose 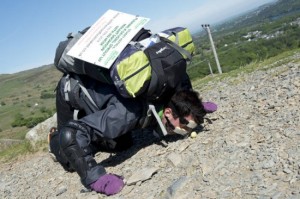 49-year-old Englishman Stuart Kettell is without a doubt the first man ever to successfully push Brussels sprout up a 1,085-meter mountain, using his nose. This weekend, Stuart managed to climb Snowdon – the highest mountain in Wales – on all fours, while pushing a Brussels sprout with his nose. You might think he’s crazy, but he actually took on the bizarre challenge to raise money for charity.

“On the 30th of July, I’m going to be pushing a brussels sprout up Mount Snowdon with my nose,” Stuart announced on his blog. “A trial run at Snowden – 0.1 mile took me 50 minutes. And that was while really driving the sprout hard, pushing it along with my nose. So I’ve calculated that it’s actually going to take me four to five days to complete the challenge. Very rough terrain up there, it’s all slate and rocks and steps.”

On the scheduled date, Kettell began his ascent of the 1,085-m mountain on the morning in order to raise money for Macmillan Cancer Support. Considering the crazy difficulty of the challenge, there were few people who actually thought he could pull it off, but Stuart himself had faith in his abilities. After all, the professional fundraiser had put himself through several other bizarre fundraising challenges before.

Previously, Kettell ran the equivalent of seven marathons in seven days inside a giant hamster wheel. He also rode a penny-farthing all the way from Land’s End to John O’Groats and walked 500 miles on stilts. He did a levitation challenge earlier this year and a trial run for the brussels sprout challenge in May: “This is the maddest, craziest challenge I’ve come up with so far,” he said back then.

“I will have a backpack on as well with all the camping gear and lots of spare sprouts. It’s all on my hands and knees all the way with a plastic guard to protect my nose. I have limited food supplies on board so we hope people can bring us up some food now and again,” Stuart said before embarking on his nose-pushing quest.

Cameraman Richard Crump, who filmed Kettell throughout the four-day challenge, to make sure he doesn’t cheat, said that the first day was a grueling start for the English daredevil. “He has no skin on his knees, his wrists are hurting and his neck is really tired. But he is still going,” said Crump. “We have had a lot of funny looks. Some people are bemused. A lot of people have recognized him as the sprout man.”

“It’s absolutely grueling,” said a spokesperson for Macmillan Cancer Support. “I’ve just watched him do just nought-point-one of a mile and it was ridiculous. He was having to move rocks out of the way with his hands and the sprout fell apart after a very, very short period of time. So absolutely mental, I have no idea how he’s going to do it, I really don’t.”

And yet, after four agonizing days of pushing Brussels sprout up Mount Snowdon, with his nose, Stuart Kettell managed to reach the summit. Of course, he didn’t push the same veggie all the way up, as the rough terrain shredded through dozens of them, and he had to replace them regularly, but he did push Brussels sprout all the way to the top, as he said he would.

Although happy about reaching his goal, the fundraising daredevil told the BBC that his latest challenge took a heavy toll on his body. “It hurt my arms, my legs, my feet, my knees and my neck,” he said.

Share
Facebook
Twitter
WhatsApp
Previous articleIncredibeard: You Won’t Belive What This Guy Can Do With His Beard
Next articleFG Had No Hand In Attacks On Buhari, Bauchi – New IGP
- Advertisement -