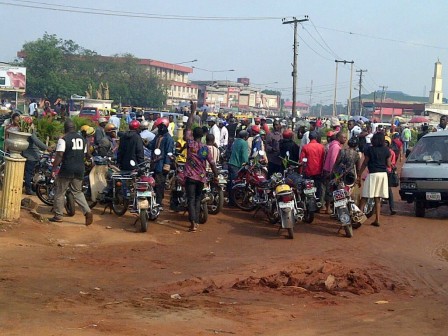 The clash had started after one resident’s father, named Ikeobi hit an motorcyclist, then immediately many motorcyclists gathered at the scene and started to harass the elderly man, the man had to run away to his house.

Well the Okada riders not content with the damage they have already done decided to follow the man into his house and started looting and destroying properties.

The Lagos State Police Deputy Public Relations Officer, Lelma Kolle, said, “The police were on normal patrol when they got wind of the situation. “The victims are now in the hospital, but there was no death. When the police arrived at the scene, they were able to calm the situation. “They recovered three extended cartridges and also made some arrest. The police have got the man and investigations are ongoing on the matter.”

Motorcyclists in Lagos state are also used as a a means of transportation due to heavy amount of traffic stops in the state, due to them being fast and needing little spaces to navigate. The Lagos state Govt have since 2005 been trying to regulate this mode of transport.