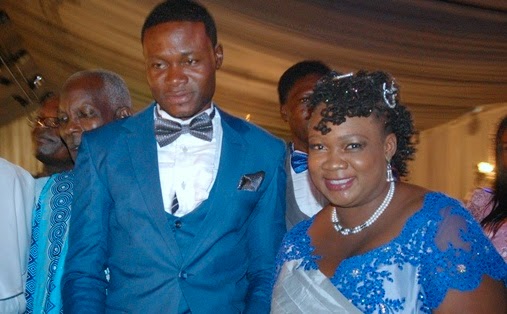 Comedienne Princess Damilola has opened up once again about her failed marriage, telling Punch that her marriage lasted less than a month and she fell ill and had to be hospitalized after her husband left her. Excerpts from the interview below…

You didn’t say what was wrong with you that you had to be hospitalized?
But you already know. We thank the Lord. The most important thing is that I am alive and better. I appreciate life more. But this one you are asking, e no reach make I sick? After my husband left after our wedding, was it not enough reason for me to be sick? Ah! The Lord is our strength.

Why are you making fun of this?
Ah! I am telling you the truth o. The truth is that we all have challenges in our lives. I have always believed that the challenge is not the issue but how you get up and get over it. I was very down last year. It was my low moment. But with the help of God and the support of my family and friends, I am here now. I am happy.
Are you no longer depressed?
I was never depressed. I reacted like every normal human being would react if she embarks on a lifetime journey and it doesn’t go as she planned it. But God has a reason for everything.

Are there times you wish you weren’t a celebrity especially when you are linked with controversies?
The only time I felt bad about my fame was when my marriage ended. I felt if I weren’t this popular; people wouldn’t have talked about it. So many marriages crash on a daily basis but you will not hear about them. Some people have been married five times but you will not hear their gist because they are not in the eye of the public. People didn’t know that the marriage had broken up until December when I felt I was strong enough to handle the publicity that it generated.
Were you shocked with the kind of publicity it generated?
I was shocked! People called me from all parts of the world including China. Some people cried while some people felt happy. Some guys said they were happy my marriage ended. Some said they were not happy that I even married the guy. Some said I looked older than him. Some said my marriage shouldn’t have ended just like that. People talked and talked. But the only time you know your marriage is successful is when you live with your partner and God calls one of you home. Marriage of 30 years can still break up. It is a bad thing for a marriage to breakup. So you can imagine the unhappiness the parties involved would be going through. Nobody is happy when his/her marriage ends. Some people see me outside and ask, ‘your marriage has ended, how do you feel?’ I will answer them that I am jumping up or how else do they expect me to feel? Nonsense! A comedian once said that ‘complete’ and ‘finish’ appear to have the same meaning but they are not the same. If you marry the right person, you are complete but if you marry the wrong person, you are finished.
Were you in love with him in the first place?
I got married to somebody who I was in love with. At that time, he also said he loved me. Unfortunately, the marriage ended too soon.
Why?
It was due to irreconcilable differences. It is not a thing of joy. I don’t think we should celebrate sadness and bad news. We should be more sensitive. No marriage should end but peradventure it does, don’t make a mockery of that person. You are not even mocking the person, you are mocking God.
Are you giving it another shot?
No! Me ke? Let us struggle first and make some money. In any case, I think I should marry a Chinese or an Indian. If many people agree that I should marry a Chinese, then I will go ahead. But a Japanese might be better. Japanese products are strong and reliable.
Is your ex-husband still your friend?
I don’t think you should call him my ‘ex-husband’ because we were together for less than one month. An ex- husband is somebody you marry and after three years or more, you separate. Anyway, I don’t know where he is. We have moved on.
Are you happy?
I am happier now and I am better. I was happy before, the only thing that got me sad was that the marriage ended. I did one wedding and it didn’t go well and I am alive. I should thank God. A lot of people lose their spouses just after a week of marriage. As long as you are alive, have hope. If God says I should marry again, I will follow His will. I have made my own attempt, let God make His own. I am sure he (ex-husband) is okay anywhere he is anyway.
Wasn’t the break-up your fault?
No. it wasn’t my fault. I can’t really say it was his fault too. It was just irreconcilable differences. We met and we were in love and we quickly got married. Maybe we got married too quickly but I have seen people who got married a month after they met and the marriage lasted. Our own didn’t work out. There is no need to apportion blame.
Do you still believe in love?
I have always believed in fairy tales and a knight in shining armour but my marriage didn’t go that way unfortunately.
There is usually a stigma associated with women who are divorced, doesn’t that bother you?
Stigma ke? That was before. Men can afford to have 20 children from different women. If your wife is abusing you and you cannot take it, my brother, please take a walk. If your husband is abusing you, take a walk. If it is like my own case that both of you cannot agree, you also need to take a walk before somebody wounds the other person. Death is final. So it is better to take off before it degenerates into death. I know somebody that separated from his wife and years later, he came back and begged her and they are back together. He, who fights and runs away lives to fight another day. Don’t die there.
So what if your husband comes back?
No o. But like I said; he, who fights and runs away, lives to fight another day.