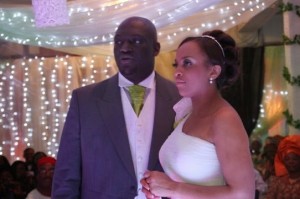 I just gave you guys one love story on how Nigerian singer, Bez met his wife; this is a similar story but one told by Sammie Okposo.

Sammie Okposo in a new interview with YES Magazine has explained how he met his wife.

Sammie says he met his wife when he decided to look away from the entertainment world, because he was tired of the many fruitless relationships he had there, and suddenly he found himself at KICC London, where he met his wife.

I went to perform at KICC (Kingsway International Christian Centre in London). Pastor Matthew Ashimolowo’s church. That was how and where I met my wife. She came with her sister. After my performance, I was signing my CDs for people. I was so busy, I wasn’t even looking up. People were on queue; they buy and I sign.

But immediately I saw her hand, I looked up, saw a very beautiful woman, but couldn’t do anything because there were so many people on the queue. Later, when I left for my hotel, I still couldn’t get her off my mind. My heart was troubled.

Then, a friend called to say he wanted to take me out because I complained of boredom. Along the way, he said we should stop over first at one exhibition going on, and reluctantly I accepted. Azuh, listen to this – when we got to the exhibition, it turned out that it was my wife’s sister that was organizing it and guess what? She was also there! And that was how we started. She refused to give me her number. She only gave me her email address and I started bombarding her with mails, sometimes 10 in a day. Haba! Na me now!

Let me tell you another interesting story – during that time, I was getting shows almost every week in London. So, we were always seeing. My manager will call me and say there’s this show, but what they are offering is not much and I will say take it! Shebi they will take care of accommodation, flight and so on? Just to see my wife o! So, I was always going to London, seeing her till we got married. But you people, the press, didn’t know until we finally got married. My marriage was a big surprise to all of you, which I like. At least, una don leave me alone (General laughter).