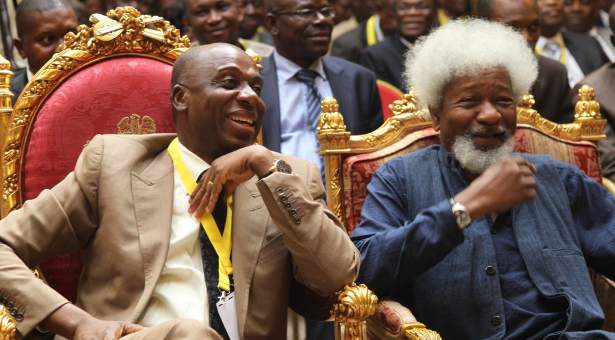 Amaechi, who felicitated with Soyinka on his 80th birthday at a dinner, held in his honour at the Banquet Hall of Government House, Port Harcourt, on Wednesday, said the renowned writer had been consistent in the literary world and had brought laurels to Nigeria despite the country’s current travails.

Explaining that Soyinka’s achievement spanned across the globe, the governor noted that he was able to attain the feat as a result of hard work.

He said, “I need to thank you for accepting the invitation by the Rivers State Government to host you to a dinner. The reason for it is basically the achievements that you have made globally not just in Nigeria.

“You have in the midst of our so many bad news brought good name to Nigeria. I will give you an example; like those days when Nigerians were very good in football, wherever we went, we would say ‘I am from Nigeria. I’m related to Okocha or to Kanu’.

“This is because the only good news then was just the football we played but as things are, the football has joined so many negative things too because we are not doing too well as we used to do before. But you have remained consistent in the literary world.

“The good thing about your own achievement is the fact that it has to do with hard work. If you don’t read, you won’t be a good writer. Nobody can tell you that once you wake up, you become a good writer. Reading begets writing and you must understand what you are writing about”.

In his response, the Nobel Laureate, who expressed gratitude to Amaechi for honouring him, attributed his good physical condition to his eating habit.