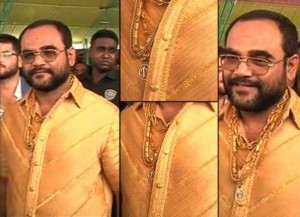 Pankaj is a textile magnate from the town of Yeola, near Mumbai city, who made his millions through his clothing empire. He now wants to make sure the rest of the world knows about his success. And what better way to flash his wealth than by wearing it? So he commissioned the solid gold shirt that he wore on the occasion of his birthday, last Friday.

The yellow metal shirt was designed by  in the nearby city of Nashik. The garment was then meticulously executed at Shanti Jewellers in Mumbai, by a team of 20 select artisans who spent 3,200 hours over the past two months ‘sewing’ the shirt.

The gold used for the shirt was of 18 to 22 carat purity, including the seven solid gold buttons that bind it. Although it is made entirely out of gold, the shirt is flexible, smooth and comfortable with a thin lining of cloth on the inside. It’s easy to maintain and repair, it can be washed and hang dried, and it comes with a lifetime guarantee of durability.

“I wanted to wear something special when I say my thanks for my success at a thanksgiving visit to the Siddhivinayak Temple of the Hindu elephant god in Mumbai,” Pankaj said. He revealed that he’s always had a love affair with gold, so much that he actually wore more gold than his bride on his wedding day! He never attends other weddings without adorning himself with at least three kilos of gold, while his wife wears a modest 40 or 50 grams.

“Gold has always fascinated me since I was five years old and studying in school. Over the years, I have become passionate about this royal metal,” he said. “I never go out with less than two or three kilos of gold jewelry. So it was logical that I would want to make my 45th birthday a golden affair.” Although he was to wear to the shirt on his birthday last Friday, he had tried it on in advance after collecting it from Shanti Jewellers in Mumbai.

It appears that Pankaj is quite alone in his love for gold – his family is hardly impressed with his shiny obsession. “They just ignore and accept it as a part of domestic life. But the rest of my extended family thinks I am weird,” he laughed. “In public, when I go around Yeola, or meet my constituents, I get extreme reactions – some say I flash my wealth, others feel I am poking fun at people’s poverty, though women are usually silent observers.”

Despite his affinity for gold, Pankaj is no stranger to poverty – he had to drop out of school in 1982 and put his soul into his family’s garment business, converting it into a huge success. And it turns out that the man who loves gold also has a heart of gold. The father-of-two is now actively involved in community projects – he recently funded 120 operations for polio stricken people at the Narayan Seva Sansthan Hospital in Rajasthan.

“I spend at least a week each year offering voluntary services at the 1,000-bedded hospital, the biggest and best for polio treatment in India,” he said. “I also arrange for any requirements for the poor patients like food, medicines, surgery and blankets, from which I get immense satisfaction.” People who know him personally do vouch for the fact that Pankaj is a genuine, down-to-earth and caring human being, involved in a variety of social activities.

And he assures that every ounce of gold on the shirt is completely accounted for: “Before the taxman starts coming around, I can guarantee that every bit is properly recorded in my company accounts,” he said.

While Datta Phuge and his 3.2-kg gold shirt earned a place in the Guinness World Records, Pankaj hopes to beat that record this year and also make it to the Limca Book of Records. Incidentally, the amount he spent on the shirt turns out to be only a fraction of what he spent on his birthday celebration, a spectacular affair that was attended by hundreds of important guests from all over the country.