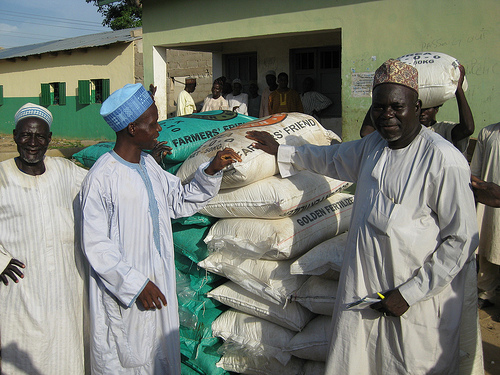 All Farmers Association of Nigeria said no fewer than 450,000 farmers registered under the Growth Enhancement Support scheme in Kano state benefitted from the Federal Government’s fertilizer programme this cropping season.

The association’s Secretary in Kano state, Alhaji Garba Bichi, made this known in an interview with the News Agency of Nigeria in Kano on Saturday.

Bichi said that each of the farmers got two bags of fertilizers, which were distributed at 94 designated centres across the 44 local government areas in the state.

He expressed optimism that aside from the fertilizers given to the farmers, the state would record abundant harvest this year in view of the amount of rainfall already recorded.

According to him, at the beginning of the cropping season, many farmers were afraid of what their yields would be due to inadequate rainfall but later the rains increased and things stabilised.

“So, this year, we are expecting bumper harvest in rice, maize, sorghum and beans, especially in Kano state”, he said.

Bichi called on the Federal Government to put measures in place to assist the farmers by purchasing the excess or surplus grains from them.

He said that the measure would encourage the farmers to remain in the business in view of the fact that farming was no longer lucrative.

“Most farmers are now operating at a loss as the cost of producing a bag of maize is about N4, 800 but it hardly fetches N5, 000 when you take it to the market.

“So, the government has to come in if farmers are to be encouraged to remain in the business”, he said.

He commended the Federal Government for the additional support it was giving to rice farmers, saying that the gesture had attracted more farmers in the country to rice production.