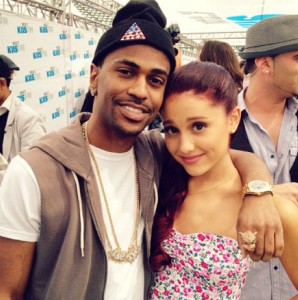 It’s been a few months now since the wedding engagement between American rapper — Big Sean and his ‘EX’ was cancelled and it seems like Big Sean has moved on just fine.

The relationship that started brewing between the duo of Ariana Grande and Big Sean a while ago is reportedly becoming more serious by the day.

According to a source: ‘Sean asked Ariana out in a romantic way and they went to the movies. Now it’s gotten serious very fast. They are much happier than in their previous relationships. He’s a good guy and she’s a sweet girl. They really gel.’

The 21-year-old singer, Ariana who previously dated The Wanted member Nathan Sykes – and the 26-year-old rapper, had ‘immediate’ chemistry.

The insider added to US Weekly: ‘It’s gone from 0 to 60 fast. They had chemistry immediately.’

Ariana recently admitted she was ‘happy’ with her latest relationship.

Asked about her love life on the ‘Today’ show recently, she said: ‘Oh, my goodness! You are putting me on the spot. I’m happy.’

The couple appeared to confirm their relationship status last month when they were caught on a behind-the-scenes camera at the MTV Video Music Awards (VMAs) holding hands as they walked down a corridor.