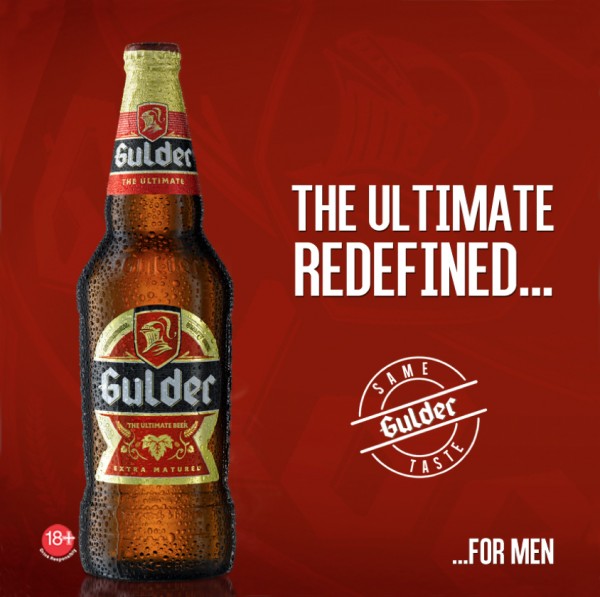 After 44 years in the market, Gulder, the beer launched in 1970 with and unconventional brown bottle, stunned consumers again as it ushered in another unique packaging on Saturday September 6th. The new bold, brown bottle comes with an attractive golden stenoil and Gulder embossed on both sides.

Gulder, the first beer to ever be sold in a brown bottle, has maintained the trademark uniqueness that set it apart from all the other beer brands in the market, and the Stenoil not only serves as a symbol of pride, but an indication of the quality of the lager. Its double-sided embossed name stamp is a first in Nigeria, further highlighting how Gulder embraces innovation and character.

Honoring the history of the Nigerian Breweries as whole, Nicholas Vervelde, MD, Nigerian Breweries, spoke about how the organization that was the first Nigerian brewery and had always seen innovation as key and how this was reflected in all brand activities in the companies portfolio, Gulder included.

“Gulder was launched in 1970 with a unique brown bottle. It was also the first beer to be sold in a can. Another historical moment in innovation for the brand happened 10years ago, when we started the Gulder Ultimate Search that has innovated and revolutionized the way other brands sponsor events. We add innovation every year and it has gone from strength to strength.”

The event, which was well attended, held at OceanView, Eko hotel and was part of a glamorous night of spectacular entertainment by international Dubai sensation ‘Tanora’ and live performances from Darey Art-Alade.