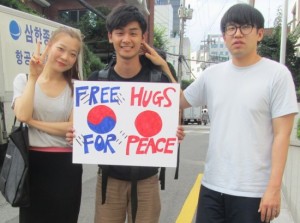 29-year-old Koichi Kuwabara has made it his mission to distribute ‘Free Hugs for Peace’ to as many people as he can – he’s been traveling across Asia for the past three years, hugging random people on the streets. His videos have gone viral on YouTube, garnering over 1.5 million views. He also has over 5,300 followers on Facebook and about 3,000 on Twitter.

Koichi, an aspiring school teacher, said: “I don’t want to just regurgitate theories written on textbooks. I want to tell the kids what I saw and learned first-hand from giving free hugs worldwide.”

He began his extraordinary adventure in August, 2011, just after he graduated from university. Since then, he has taken his Free Hugs initiative to several cities in China, Hong Kong, South Korea and Taiwan. At each location he visiyed, Koichi held up a sign that displayed the flags of Japan and the country he was visiting, along with the caption ‘Free Hugs for Peace’.

When passersby spotted the sign, they either ignored it and walked away, or stopped for a hug – Koichi was only too happy to give one away for free. His aim, he said, was to encourage neighboring countries to ‘set aside their political problems and the hatred and contempt among them’, because despite their differences, ‘all Asians have much in common’.

“That we do not agree on some territorial issues does not mean we cannot be friends,” he implored. “We are all equal. I would like the people to realize that by watching my videos.” Koichi’s dream is to see all Asian people united someday, and he believes that ‘South Koreans or Chinese getting along well is much more fun than hating each other’.

Koichi’s ideas might seem hopelessly optimistic, but they couldn’t have arrived at a better time. According to reports, Japan’s relationships with its neighbors – South Korea and China – aren’t exactly cordial at the moment.

A recent survey conducted by Japanese citizens’ group Genron NPO and the East Asian Institute, a South Korean organisation, revealed that 54.4 percent of Japanese respondents had a negative impression of South Koreans. A whopping 70.9 percent of South Koreans held similar sentiments towards the Japanese. 76.8 percent of Koreans criticized Japan for its ‘lack of proper repentance concerning its wartime aggression on Korea’.

Koichi experienced the truth behind those statistics on his first visit to South Korea for the Free Hugs project. He had spent less than 30 minutes on the streets when an elderly Korean man came up to him and used aggressive words and gestures, asking him to go away. “I have to admit, I was shocked,” Kochi said. “I knew this kind of thing would happen, and I thought I was prepared. But it was still very heartbreaking.”

He had another negative experience in Nanjing, China, which he explains is the ‘world’s most difficult place for a Japanese person to give out free hugs in’. Most people in Nanjing frowned at the Japanese and Chinese flags he had displayed together on his sign. A gang of policemen accosted him, asked him to stop, and took him to a nearby police station.

Surprisingly, once they reached the station the policemen had relaxed and told him he was doing a good job. “I believe as policemen, they need to give an appearance of cracking down on people like me,” he explained. “But once we were alone, they were all friendly. We even took a photo together.”

But Koichi insists that this was the worst he has had to endure – the majority of locals in China, Taiwan and South Korea have welcomed him and even given him free snacks or bottles of water. He noticed that the younger generation tends to be more open-minded and free from prejudice. “Most of my friends want to hear more juicy details about how I struggled while doing this thing,” he said. “They say, ‘come on, but you must have been shoved away or spat on or something, right?’ I’d love to live up to their expectations, but seriously, I have no such horrible experiences to tell. It isn’t that hard, giving out free hugs to strangers.”

After completing the first phase of his project, Koichi briefly returned to Tokyo to work at Disneyland. He plans to embark on the journey once again, to cover more cities and spread his message to more people. He wants to continue distributing hugs throughout East Asian countries, and the rest of the world, if he can manage it.

Koichi explained that people in Asia are so unaccustomed to hugging that it is the ultimate expression of friendship. “A hug starts with a one-on-one relationship. I think it’s a small act, but it might change the world by breaking down psychological barriers a little.” He dreams of the day when the Japanese Prime Minister and the President of South Korea share a hug. “I think I’ll break down in tears when that happens,” he said.