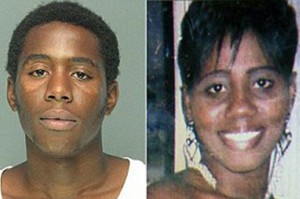 Some people have no respect for their parents and it shows in this Miami teen. Kit Durant was arrested for killing his mother, hiding her body in the bedroom and then throws a party afterwards.


Durant tells police that he was already angry with his mother the night before. He and his mother had an argument about staying out late to which he then stabbed and killed her at 35 years old. In their apartment, the body of, Renette Emile was identified with 14 stab wounds.

Kit and his three-year-old brother were reportedly living with the corpse for more than a week. Four days after the murder Kit decided to host a party according to neighbors.

Investigators found that Kit cleaned up the blood, drenched her in laundry detergent then wrapped her body in bed sheets.

Whenever a family member attempted to reach his mother at her apartment Durant would tell them they she could not come to the phone.

“The three-year-old child was given to family members and Durant was detained for questioning where he has confessed to killing his mother,” police spokesman Alvaro Zabaleta said.

If you don’t have a heart for the life of your mother how much heart could you actually have…?