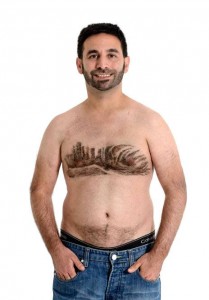 While some men like to leave their bushy chests intact, others prefer to stay groomed with a trim or a wax. And then there are a few fuzzy fellas who like putting an artistic spin on body hair. Helping the trend ‘grow’ is British celebrity hair stylist Daniel Johnson, who has been wielding his clippers to create skylines and iconic landmarks on the chests of hairy Brits.

Having cut the hair of English football giants like Ashley Cole, Gareth Blue and Erik Lamela, 32-year-old Daniel is now channeling all his talent and experience towards men who want to do interesting things with their chest hair. He calls the art ‘manscaping’, and his project is being sponsored by male grooming brand Braun. 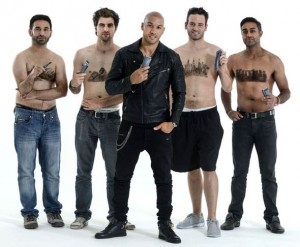 Daniel said that he was inspired to take on the challenge after he came to know of the #chesthairbikini Instagram movement, where men trimmed their chest to resemble to shape of a bikini. Of course, his work is a lot more complicated and intricate. Once he’s done trimming and carving, the finished design consists of hair at five specific lengths – 0mm, 1mm, 2mm, 5mm and 15mm. This is a tough thing to do because chest hair is a lot shorter and curlier than hair on the head.

His signature carvings include some of the world’s most recognised landmarks like the New York skyline, Egyptian Pyramids, Sydney Harbor, and Stonehenge. It takes him at least two-and-a-half hours, four different shaving tools, and up to 176 individual ‘incisions’ to create a single landmark on one man’s chest. Of all his designs, Daniel said that the toughest ones were New York and Sydney.

“Creating such intricate designs on men’s chests was certainly a challenge, due to how the hair is formed and how it reacts to even the most precise shavers,” Daniel explained. “I set out to achieve something that made people consider the possibilities of grooming and style and challenged my abilities in order to keep up with the high standards expected from my clients.”

According to a poll conducted by Braun, almost 1,000 Brits conceded that they spend a lot of time grooming their body hair. The study also revealed that 62 percent of British men aged between 25 and 45 now try manscaping.

“Our recent study and the social media trends that we are seeing have really shown us how male attitudes towards grooming are changing,” said Braun style director Fabio Vivan. “We wanted Daniel to put our cruZer styling range to test by setting him the ultimate manscaping challenge and we think the results are both impressive and inspiring.”