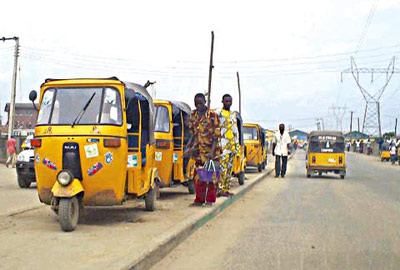 The Zamfara State Government on Thursday distributed 200 tricycles to members of the Amalgamated Commercial Motorcycle Association and WAZOBIA KEKE NAPEP Association in the state.

The tricycles were distributed by the committee set up by the state governor and chaired by the Speaker of the State House of Assembly, Alhaji Sunusi Rikiji, in Gusau.

Speaking at the occasion, Rikiji said the state government decided to provide the machines to the associations because of their vital roles in moving people from one place to the other.

“It is unfortunate that women in the state use motorcycles while moving around; we, therefore, decided to bring a safer alternative and more affordable means of transportation to them.

“The tricycles were provided to members of the associations to support their businesses and provide jobs to the teeming unemployed youths.”

He commended the state government for the gesture and advised beneficiaries against selling the machines.

In their response, the chairmen of the associations, Isma’il Abdullahi, WAZOBIA KEKE NAPEP and Aminu Haido of the Amalgamated Commercial Motorcycle Association, thanked the state government for the gesture.

They assured that their members would comply with the agreement reached before approval was given by the state governor to provide the tricycles. (NAN)