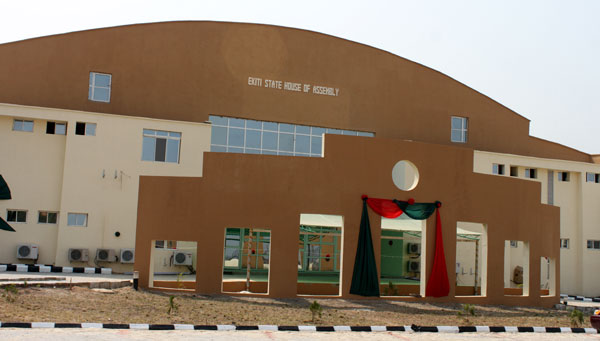 The All Progressives Congress caucus of the Ekiti State House of Assembly on Thursday dismissed insinuations that they were plotting to impeach the newly inaugurated Governor of the State, Mr. Ayodele Fayose, describing the allegation as spurious and unfounded.

The caucus also denied receiving money from a former governor of Lagos State and national leader of the APC, Asiwaju Bola Tinubu, to carry out the purported impeachment, saying “APC doesn’t believe in sharing booty or public money for sinister motive”.

The 19 APC lawmakers, including the Speaker, Dr. Adewale Omirin, made this position known in Ado-Ekiti, where they denied the allegations made by a group, Ekiti Democratic Coalition, against them in a statement on Wednesday and signed by its Coordinator, Comrade Aderemi Olaleye.

The coalition had alleged that 15 APC members of the Assembly had been induced with N800 million to unseat Fayose after a secret meeting with Tinubu in Lagos.

The group further alleged that each of the lawmakers received N50m while the Speaker of the Assembly, Omirin, got N100m.

But the Speaker, his deputy, Adetunji Orisalade, and the Majority Leader, Churchill Adedipe, who addressed journalists on behalf of the caucus, challenged anyone with proof of the bribe to come forward with it.

Omirin, who has also been having a running battle with the PDP-led government in the state over the closure of an integrated service filling station – one of the four sealed off by the state government on Tuesday – said to be owned by him, said his ownership of the business did not contravene the Code of Conduct for public officers as alleged by Gov. Fayose.

The Speaker said, “We are in a season of lies in Ekiti and it will be in our best interest to tread softly, because I don’t think we need this. How to make Ekiti better should be Fayose’s priority not to cause division or portray some citizens as desperate and irresponsible.

“The former President W. Bush, a Republican, ruled for eight years in the United States under a Congress dominated by Democrats. And the kind of composition we are having here is what is happening in Nasarawa and Imo States and they are not being put in the news for wrong reasons as we have in Ekiti”.

Corroborating the Speaker, Adedipe said the state lawmakers travelled to Lagos for consultation on the forthcoming presidential primaries in Abuja.

He explained, “The onus of proof is on the PDP to convince the world that we were bribed to the tune of N800m by one of our leaders to impeach Fayose.

“The Governor has not even committed any offence to warrant such. I know before anybody can be impeached as a governor, he must have committed certain offences.

“So, we advise Governor Fayose to work with us and stop taking advice from political jobbers or lay-abouts, who are stoking the fire of violence. Whatever may be his vision in the areas of education, economy and others, we are ready to partner him as long as it is in the public interest”.