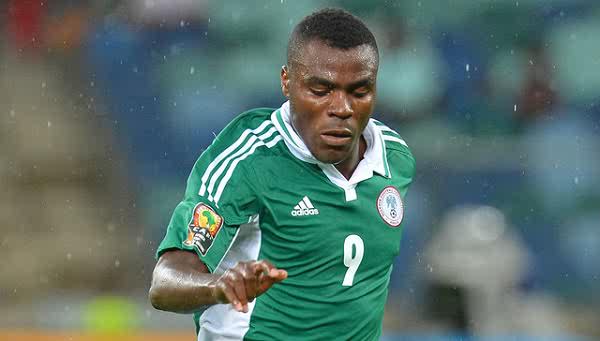 Nigerian star striker Emmanuel Emenike has revealed that there is a strained relationship between him and Super Eagles head coach, Stephen Keshi over his fitness.

The Fenerbahce striker who got cut out from the starting line up at the 2015 AFCON qualifier in Calabar, which Nigeria lost 2 – 3 to Congo, spoke of his dissatisfaction with the former Togo boss.

Reports from Africanfootball quotes Emenike as saying: ‘I have always treated Keshi like a father and he has always lived in my heart to be a good father. Before now, we have enjoyed a smooth relationship and I see no reason why he should be holding a grudge against me.’

Speaking further, Emenike said: ‘Before the 2013 Africa Cup of Nations, I could remember he called me to have a chat and I was ready to give him my best. Keshi is good coach, a coach with high pedigree. I give him all the respect I can give my father whenever I come for a national assignment.’

The former Spartak Moscow who didn’t forget to shower praises on the coach, also spoke about facing his professional career.

‘I have maintained a solid relationship to avoid quarrelling with him but if my invitation to play for Nigeria does not stand for peace, I will like to stay with my club.’

‘I have always loved to give my best for Nigeria and I always make it known that I can always fight to score goals for my country and I will not like Keshi to let Nigerians see me as an undisciplined player who is not ready to give them my best again.’