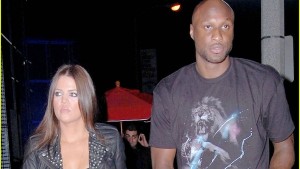 Reports are suggesting that Lamar Odom is refusing to divorce Khloé Kardashian.

The ‘Keeping Up with the Kardashians’ star filed court documents to legally dissolve her 4-year marriage to the former NBA star in December after months of lingering rumours that he was addicted to cocaine and cheated on her with multiple women but he is yet to respond to her petition.

A source told Us Weekly magazine: ‘Khloé can’t even get in touch with him right now.’ Another insider said: ‘He refuses to sign the divorce papers.’

A friend close to Lamar, said he is still hoping to repair their marriage, even though Khloé has moved on and recently split from rapper French Montana after eight months of dating.

Lamar has been keeping a low profile since he was dropped by the New York Knicks for failing to ‘uphold the standards to return as an NBA player’ over the summer.

The athlete has been sending Khloé and her mother, Kris Jenner, flowers on a regular basis in a bid to win her back.

A source recently said: ‘He sends her favourite flowers all the time just to make her smile. ‘Kris has always held a special place in her heart for Lamar, so when he reached out to apologise to her too, she was like putty in his hands.  ‘Lamar knows that even if he earns Khloé’s trust back, it’s her mom who makes all the family decisions. He’s thrilled they’re talking again.’