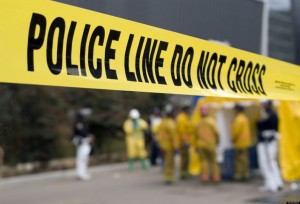 An unidentified suspected burglar was on Sunday inflicted with deep machete cuts after he was caught attempting to steal wine and alcoholic beverages from a shop along the Atu Street intersection of Goldie Street in Calabar, the Cross River State capital.

The burglar was said to have broken into the shop in the early hours of the day with three other accomplices who managed to escape from the scene of the incident.

An eyewitness, B.F. Johnbosco, said the thieves had broken into the wine shop around 5am, but someone sighted them and raised the alarm.

Johnbosco said in an attempt to nab the four suspects, three escaped while the fourth who was still busy gathering drinks inside the shop, was apprehended and dealt with summarily.

He said, “Someone noticed when the burglars broke the iron bars on the door of the shop and he informed the owner on the phone that his shop was being burgled. The man mobilised some of his friends and neighbours and they came out with machetes and sticks.

“When they approached the shop, three others managed to escape leaving one of them who was right inside loading wine bottles into a carton. They descended on him and inflicted severe machete cuts on him and dragged him to the other side of the road which borders Holy Child School and dumped him there.” The man was stripped of his shirt, but still wore a black pair of jeans.

The suspect, who was lying on his back had severe machete wounds all over his body but was still breathing and his eyes were open.

He was later conveyed by the police to the General Hospital, Calabar, at about 8.45 am.

When contacted, the state Police Public Relations Officer, Mr. Hogan Bassey, confirmed the incident, saying some items were retrieved from the burglar.

While appreciating the gesture by members of the public in tackling crime, Bassey warned that suspects should be handed over to the police instead of attempting to kill them.

He said, “The facts are correct. Wine and other stolen items were recovered from the suspect who is responding to treatment at the hospital. We have not verified his name.

“We appreciate members of the public for their cooperation but we do not encourage them to beat suspects to a coma as it will impede the process of investigation.”