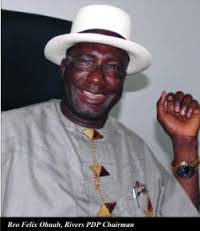 The Peoples Democratic Party, PDP, Rivers State chapter, said on Tuesday that it would not change its ‘no zoning’ stance on the plans of the party to pick its governorship candidate for the 2015 election.

The State Chairman of the PDP, Chief Felix Obuah, insisted that the party had decided to make its governorship primary election an all comers affair for qualified aspirants, irrespective of the person’s ethnic nationality, local government area or senatorial district.

In a statement by his Special Adviser on Media, Mr. Jerry Needam, Obuah noted that the decision to avoid zoning of the governorship position was based on the party’s determination to reclaim every political office “stolen” from the PDP.

Some members of the state PDP had disagreed with the party on its recent stand on zoning, insisting that rotation of the governorship position was necessary in the interest of justice and fair play.

But the state party chairman argued that no other system could be more democratic than throwing the governorship race in the state open to every qualified aspirant.

“The Rivers State Chapter of the Peoples Democratic Party has stated for the umpteenth time that there is no going back on the resolve to throw its primaries open to all qualified member aspirants and ethnic groups in the state.

“This is necessitated by its strong desire to reclaim all the political offices stolen from the party and must therefore field only tested, trusted and capable candidates that can stand any opponent from any party anytime”, Obuah said.

Calling on those opposed to the party’s decision to look elsewhere for work as the decision remained irreversible, Obuah stated that he was less bothered by such baseless criticisms.

He stressed that those criticising the decision of the party as it concerned zoning did not mean well for the PDP.