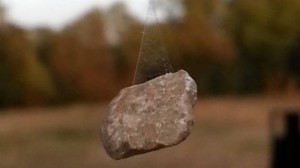 Did you know that spiders have been making webs for about 100 million years? So they have certainly had time to evolve their skills. Take this European spider for example. Stuck with the challenge of wanting to build its web in a tricky place, this little guy had to get creative. The web hung from the middle of a ceiling arch in a garage and needed something to hold it down.

So the spider, likely not named Charlotte, found a rock and, attaching one silk at a time, climbed back and forth between the rock and its web, slowly pulling the rock toward its web and using it as suspension. The images were posted by Imgur user reverseLoop, who wrote that he’d  “never seen anything like it before!”  As crazy, and somewhat scary, as these construction skills are, this is a common tactic for spiders that build their webs in awkward real estate. They have been seen using leaves and shells like in this video posted by the BBC. 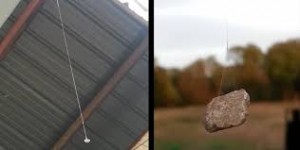 Spider silk is one of toughest known biomaterials, able to absorb massive amounts of energy before breaking. From what I know, a broom can destroy them, though. We want to know what crazy skills you have seen.