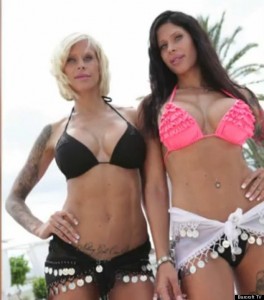 Sara Koponen and Emma Koponen may be identical twins, but there are some differences.

Sara is blonde while Emma has dyed black hair and a skull tattoo on her left leg.

Nevertheless, the 25-year-old twins live together, wear the same clothes, have the same friends and work the same jobs as ringside girls in Marbella, Spain.

They also have the exact same surgical modifications.

Sara and Emma have spent nearly $24,000 on cosmetic surgeries — each one carefully calibrated to match up identically with the other.

“As twins we have to look the same,people have expected that from us since we were children,” Sara Koponen told Barcroft TV. “We are both addicted with modifying our bodies — but we have to make sure we both do the same things otherwise we won’t match. We are obsessed with surgery and the pursuit of perfection — for us there’s no such thing as too much.”

The two grew up in Vastervik, Sweden, but were studious and more interested in sports than boys.

But that changed when they were 16.

“There was one girl in our class who had big boobs and we fixated on her — we were so jealous,” she said, according to the Daily Mail. “We were so self-conscious about our boobs we grew our hair long to cover our chests.”

The Koponen twins have undergone three breast enhancement surgeries to increase their busts from an A to an E, and get lip fillers on a regular basis.

There is more surgery planned in the future, including butt implants, dental veneers and twin nose jobs.

Emma is the “twinstigator” for the surgery.

“I think it’s always me who wants more,” she said, according to News.com.au. “It’s usually my decision at first and Emma says yes, for example because she didn’t want to have smaller boobs than me.”

The Koponen twins are happy with their appearance, but admit their family members aren’t quite on board.

“Our father is not proud of us at all — he hates our big boobs and our tattoos,” Emma said, according to the Mirror. “Some girls have called us names like ‘whore’ to our faces, but I think they are just jealous of the attention we get.”

Sara and Emma insist they love their looks and say their collective goal is to look as artificial as a doll by the time they are finished.

However, Sara also admits that she would never allow a child to follow in her footsteps.

“I’m proud about how I chose to change my body but I would never let my own child do this to herself,” she said, according to HuffPost UK. “You will never be happier — that’s the point. You will always want more. If you start, you will never stop.”

To see how the Koponen twins have changed over the years, click over to HuffPost UK.