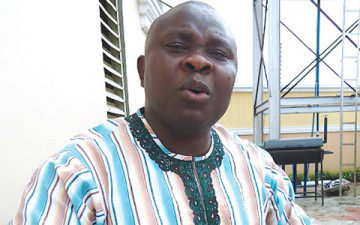 Kinsmen of Governor Rotimi Amaechi of Rives State have been urged to call their son to order over the verbal attacks he has been dishing out recently against President Goodluck Jonathan.

The leader of the six anti-Amaechi lawmakers in the Rivers State House of Assembly, Mr. Evans Bipi, who made the call yesterday while speaking with journalists in Port Harcourt on Wednesday, also warned that the state would be made ungovernable for the governor should he refuse to heed the call to stop attacking the President.

Bipi stressed the need for the governor’s kinsmen to call him to order so that he (Amaechi) could conclude the remaining months of his tenure in peace.

He expressed regret that Amaechi had consistently denigrated the president and his wife, Dame Patience Jonathan, describing the action as an abuse of the governor’s immunity.

Bipi said, “We appeal to chiefs and leaders of Ubima community, Amaechi’s native home to ask their son to desist from attacking the President and his wife if he wants to peacefully conclude the remaining months of his tenure.

“Let me warn that we will make the state ungovernable for him (Amaechi), not minding his immunity if he does not refrain from this irresponsible action against the President and his wife.

“It is regrettable that Rotimi Amaechi has consistently insulted and disparaged a sitting President and his wife with impunity in abuse of his immunity as a governor. May I also warn Amaechi to also stop using the platform and resources of Rivers State for his personal interest”.

He, however, accused the state governor of using N19 billion belonging to the state to organise ‘an extravagant’ rally for the All Progressives Congress.

Bipi said, “We feel pained that we are constrained to take necessary action against him (governor) because of the immunity, which he enjoys. However, we are encouraged by the fact that his arrogant reign as the governor of Rivers State will soon come to an end.

“In less than eight months from now, Amaechi will be made to answer for all his actions against President Goodluck Jonathan and his wife Dame Patience Jonathan”.

Challenging the governor to show proof where Mrs. Jonathan, who he once famously called his ‘Jesus’, allegedly sent militants to stage protest against him for refusing to share Rivers money with her, Bipi also accused the governor’s wife – Judith Amaechi – of receiving N36 million from him to support her Empowerment Support Initiative programme.

Reacting to the allegations, the Chief of Staff, Government House, Port Harcourt, Chief Tony Okocha, said it was wrong and irresponsible for anybody to say that the state would be made ungovernable.

He stressed that Gov. Amaechi had nothing personal against the president and first lady, adding that the bone of contention had to do with the neglect of Rivers State and the people by the Federal Government under the leadership of President Jonathan.

He maintained that Amaechi couldn’t have kept quiet as a governor in the face of ill treatment against the people of the state, adding that the lawmaker spoke out of ignorance.

“On the allegation that the governor spent N19 billion for an extravagant rally, they saw the tsunami or the crowd at the stadium and they are now looking for a way to explain it because they have been deceiving the Presidency that the APC is not on the ground in Rivers State.

“That is just the minutest of the crowd. With a snap of the hand, the APC supporters would gather in a larger number than what they saw on Saturday. The people of the state are simply in love with their governor”, Okocha added.

He, however, disagreed with Bipi on the allegations that Mrs. Amaechi collected N36 million from him to support her ESI programme, adding that burden of proof lies on the person making the allegation.