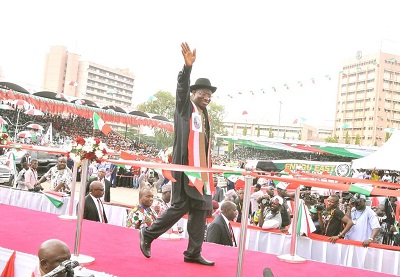 The Peoples Democratic Party caucus in the House of Representatives said on Tuesday that President Goodluck Jonathan remained Nigerians preferred choice for the 2015 presidential election.

It said this was evident in their “massive turnout” at the Eagle Square in Abuja to be part of Jonathan’s presidential declaration yesterday.

The position of the caucus was stated by Deputy House Majority Leader, Mr. Leo Ogor, who disclosed that the ruling PDP was already celebrating victory on account of the turnout of Nigerians at the Eagle Square.

The PDP legislator from Delta State added, “You saw the mammoth crowd at the square today cheering our President and what does that tell you?

“That is a confirmation that there is no vacancy in Aso Rock come 2015.

“As I speak to you now, we are already celebrating our victory in advance because the Nigeria people just confirmed to us that victory is ours in 2015 by His grace.

“I was amazed at the level of acceptance and the large crowd that turned out at the square to celebrate with the PDP”.

The Rep member claimed that the party was loved by all segments of Nigerians, who had expressed the “genuine desire” to return Jonathan for a second term next year.

According to Ogor, with the massive turnout, there is no need to hire the services of soothsayers to know that Jonathan will emerge victorious in the 2015 presidential poll.

“It has become very clear to us now. We do not need a soothsayer to confirm to you that we have already won the 2015 presidential election, considering the fact that all segments of the Nigeria people including artisans, market women just mention it, were all adequately represented,” he told reporters shortly after the presidential declaration.