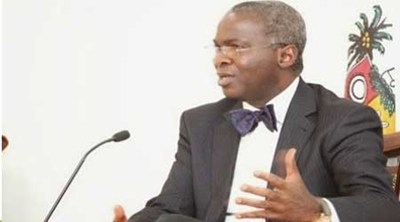 With six months left to the end of his eight years tenure, Governor of Lagos State, Mr. Babatunde Raji Fashola (SAN), has said he does not know what the political future has in stock for him.

Fashola, who said this during an interview with Channels Television on Monday, noted that in spite of the efforts of the Peoples Democratic Party, his party, the All Progressives Congress, would retain Lagos State in 2015.

When asked what his next step in politics would be, he said, “I don’t know honestly. I do well in multitasking. I have a job to do that runs until May 2015. And up till now people haven’t stopped asking me and my government for services. My mandate expires on the 29th of May and I’m going to give my best shot until the very final hour”.

The governor expressed the optimism that his successor would be able to do better than he has done.

On whether he would influence the emergence of the next governor of Lagos, Fashola said it was not his place, but that of the electorate to decide.

“I’ve met those who are running for governor on the platform of my party and I think all of them are good enough to lead us but the ultimate choice of who will lead us will depend on the larger body polity and the registered voters”, he said.

On the ongoing distribution of permanent voter cards in the state, Fashola said the Independent National Electoral Commission, INEC, has shown that it was poised to do the bidding of some political interests.

Apparently referring to the INEC Chairman, Prof. Attahiru Jega, the governor said “if you take a job you cannot do, resign”.

“I don’t know what else an electoral commission would be doing after an election other than to be planning for the next election. Let me be fair and admit that election planning is a very huge logistics. I know election do not achieve 100 per cent. That is why election monitors look out for a minimum standard; not what the umpire says but what the participants say. If the foundation of the election which is the voters’ registration is faulty then we may be heading for trouble.

“This is what should have been over four years. When INEC started this exercise, they started with six states; another six states and one expected that they would get better. Suddenly, they took 12 states at the same and halfway they said they were abandoning some states. What kind of message are you sending? Look at the states involved Lagos, Kano and Rivers, in the South-South, easily the largest in that area. Ogun State, densely populated, sharing borders with Lagos. These make up a significant voting population”.