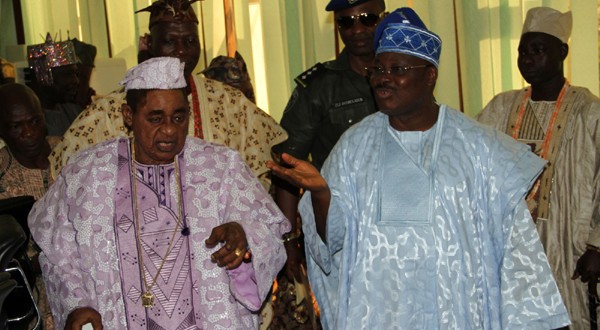 The Alaafin of Oyo, Oba Lamidi Adeyemi, has said contrary to rumours making the rounds that all was not well between him and governor of Oyo State, Senator Abiola Ajimobi, there is no strain in their relationship. This is just as he threw his weight behind the aspirations of the governor.

Speaking yesterday when the governor paid him a courtesy call in his palace as part of his ongoing tour of local government areas in the state to distribute appointment letters to 5,300 teachers recently engaged by his administration, Oba Adeyemi pointed out that Ajimobi had been doing all within his powers to govern the state within the confines of civility and human understanding.

“The governor has not offended me in any way. He has not done anything for us to part ways. We are still together. May God Almighty continue to guide him a-right. I will not tell lies, if he offends me, I will tell him. If there is need for us to part ways, I would have told him, but there is no reason to warrant this”, the monarch said.

In his remarks, Governor Ajimobi thanked the revered Oba for his assistance to the state in terms of fatherly advice in the last three and half years of his tenure.

Ajimobi also confirmed that the relationship between him and the monarch had been cordial since inception, and likened it to a father-son relationship.