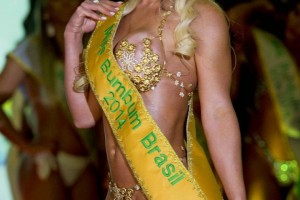 The annual Miss Bumbum pageant has become very famous all around the world now and is even more of a reallybig deal in Brazil.

A new winner has emerged and her name is — Indianara Carvalho. She joyously had to flaunt her well-formed behind in front of a panel of judges in Sao Paulo to beat competition from 14 curvy rivals – and bag a cheque for £14,000 plus hundreds of thousands in appearances and endorsements.

Launched four years ago, the raunchy Miss Bumbum contest is now more popular than ever.

The competition showcases the buttocks of representatives from each of the country’s 27 states – and 15 battle it out in the final.