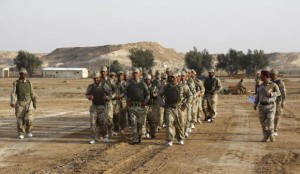 The United States has revealed plans to buy arms for Sunni tribesmen in Iraq including rocket-propelled grenades, AK-47s and mortar rounds to help bolster the battle against Islamic State militants (ISIS) in Anbar province, according to a Pentagon document prepared for Congress. Reuters report:

The plan to spend $24.1 million represents a small fraction of the larger, $1.6 billion spending request to Congress focusing on training and arming Iraqi and Kurdish forces.

But the document underscored the importance the Pentagon places on the Sunni tribesmen to its overall strategy to diminish Islamic State, and cautioned Congress about the consequences of failing to assist them.

“Not arming tribal fighters will continue to leave anti-ISIL tribes reluctant to actively counter ISIL,” the document said, using another acronym for the group which has seized control of large parts of Syrian and Iraq and is gaining territory in Anbar despite three months of U.S.-led air strikes.

A U.S. official said on Saturday that the document was posted this week. Click 1.usa.gov/11nsTuN to read it.

It said all U.S. support was directed “with, by and through” Iraq’s government, suggesting any weapons would be supplied through Baghdad, in line with existing policy.