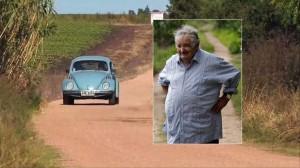 Mr Mujica, the man who was once referred to as “the poorest president in the world” has revealed that he has offered to pay a sum $1 million for a 1987 Volkwagen Beetle car, why is he doing this? Read on SkyNews:

Mr Mujica, the man once nicknamed “the poorest president in the world”, told a local publication that an Arab sheik had offered to pay $1m (£631,000) for the humble car.

The offer followed the Mexican ambassador to Uruguay’s suggestion that Mr Mujica auction the Beetle in Mexico, predicting he could get 10 four-wheel-drive trucks for it.

Mr Mujica, who famously owns a three-legged dog, Manuela, said any money he received for the car would be donated to a programme he supports providing housing for the homeless.

The former leftist Tupamaro guerrilla leader said that if he bought trucks for it, they could go to Uruguay’s public health office or his campaign workers.

The South American country’s citizens have been amused by the idea.