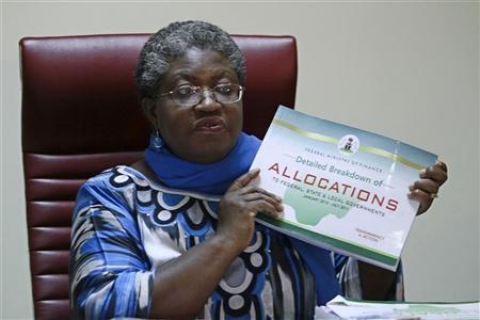 The Minister of Finance, Dr Ngozi Okonjo-Iweala, on Wednesday said that there was no money missing from the Excess Crude Account as reported in some national dailies.

Okonjo-Iweala disclosed this while presenting the proposed 2015 budget in Abuja.

According to her, report that one billion dollars was missing from the account was a misinformation.

“Today I had seen a headline that said that there is one billion dollars missing in the Excess Crude Account.

“I just want to use this occasion to correct that and say that there is absolutely no money missing and I do not know where that notion came from.

“This is why you now have about 3.1 billion dollars in the ECA and I will implore that if people need information on what is happening, we are available to answer the questions.

“We should not frighten the country by making headlines that are untrue and bogus”, she said.

The minister said those types of information were designed to create fear and panic but emphasised that panic was not a strategy.

“As I said earlier, panic is not a strategy; what is necessary is a systematic and focused approach to the problem and that is what this government is proposing.

“We should see this challenging times as opportunity to further move this economy on the right track and many commentators have also said this.

“Luckily this administration had taken to diversification seriously and begun to make inroads prior to this time”, Okonjo-Iweala said.

Okonjo-Iweala, however, warned Nigerians to be careful of those critics whose analyses were not only bogus but also not founded on facts.

She said the Federal Government was open to constructive criticism and ready to listen to them and give advices.

“We need to be careful because there is a lot of advice flying around that may not work for us.

“We need to open our eyes and ears to good criticism; well offered advice and take them”. (NAN)