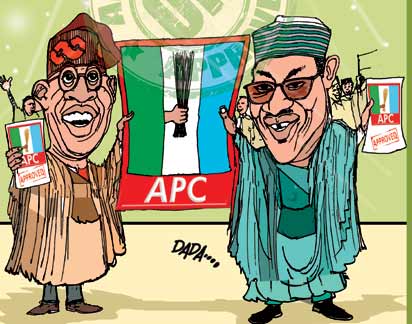 Indication has emerged that the All Progressives Congress (APC) may be fielding a Buhari-Tinubu ticket in the 2015 presidential election as the former Lagos State Governor Bola Ahmed Tinubu has signified interest in the Vice president slot.

The presidential flag bearer of the APC, Muhammadu Buhari had conceded the vice president slot to Tinubu, who many thought would just pick a candidate he thinks would better the party’s chances in the coming election, but recent comments from his camp show the national leader of the party may also be interested in becoming Buhari’s running mate.

In a statement by Tinubu’s media aide Sunday Dare where he rubbished a report by online news platform Sahara Reporters on allegations bordering on the former governor’s academic qualification. He said the allegation was not new, but how desperate Tinubu’s detractors have become to stir up a new controversy using an old lie is alarming.

“In the past these allegations were successfully rebutted. Recent attempt to present them as fresh allegations will not go unchallenged.”

“For perhaps the most gifted politician of his time not to seek national office is a luxury a nation in this dire circumstance can ill afford. In the end, governance has little to do with religion, region or rumour. It has to do with vision and competence.”

The APC is believed to be avoiding a Muslim/Muslim ticket for the 2015 presidential election, but Tinubu’s alleged insistence that he is the most qualified to be Buhari’s running mate might have backed the party at a corner.

National Chairman of the party John Odigie-Oyegun has however told newsmen that the party will announce a candidate by Wednesday.