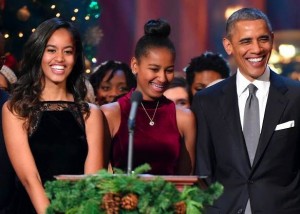 The Christmas season is just around the corner and everyone is feeling it in the air, even the American president and his household.

Christmas in Washington is an annual Christmas television special that currently airs on the U.S. TNT network.

This year happens to be the 33rd annual “Christmas in Washington” concert.

President Barack Obama and his family attended the concert which held at the National Building Museum. The event is a benefit for the Children’s National Health System.

Right before the show began, The Obama comprising Obama, his wife, Michelle, and daughters, Sasha and Malia, presented gifts— including a basket of children’s books— to former patients of the center.

The six youngsters, dressed as elves, posed for portraits with the first family.