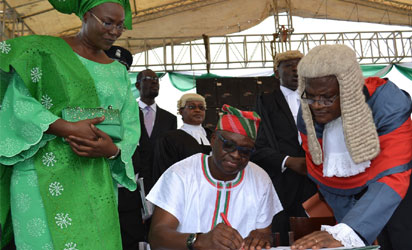 The Election Petition Tribunal sitting in Abuja on the Ekiti State governorship election has dismissed the petition filed by the All Progressives Congress, APC, challenging the declaration of Mr. Ayodele Fayose of the Peoples Democratic Party, PDP, as winner of the election.

Fayose had defeated Dr. Kayode Fayemi in the June 21 Ekiti governorship election but while Fayemi, who was the incumbent accepted the outcome, his party – APC – rejected it and approached the tribunal to have the election nullified.

Chairman of the tribunal, Justice Mohammed Ibrahim-Siraju, who dismissed the petition on all grounds, pointed out that the petitioner failed to substantiate the allegations with evidence.

The APC had, among others prayers, demanded that the election of Fayose be nullified because it was heavily militarized and that its officers and members were arrested, molested and detained during the election.

It also claimed that Fayose was not qualified to have stood for the election in the first instance, having been indicted by a probe panel and impeached during his first term in office for breach of code of conduct.

But Justice Siraju, in his judgement that lasted over four hours, held that the petitioners failed to prove all the allegations raised against the governor.