In a bid to wage war against terrorism and other security threats on Nigerian educational institutions, the President, Association of Heads of Security of Tertiary Institutions, Col. Umar Tilde, has called on the federal government and the National Assembly to make it possible for them to carry arms.

Tilde, who made the statement in Ilorin on Wednesday during a security conference of heads of security of higher institutions in Nigeria, argued that it had become imperative for them to be allowed to carry light weapons as some tertiary institutions in the country had become victims and target of insurgency.

The security boss noted that some tertiary institutions in the country had suffered many casualties as a result of Boko Haram attacks.

He lamented that they had been handicapped to effectively ward of attacks as they are not currently allowed to carry arms and weapons in the institutions. 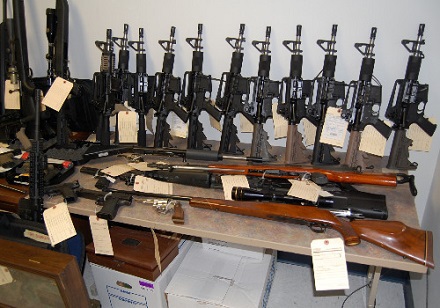 According to Tilde, heads of security in tertiary institutions are experienced ex-servicemen with competences and requisite expertise in handling weapons.

“Majority of the heads of security of tertiary institutions are ex-service men from military and paramilitary who are well trained in weapon handling and they have some larger percentage of their staff who equally have the training of handling weapons.

“The government should have a rethink so that security outfits in tertiary institutions can equally be screened, those proven to be well trained and have not lost their values can still hold weapons,” Tilde said.

Also speaking at the occasion, the Vice-Chancellor of University of Ilorin, Prof. Abdulganiyu Ambali, stated that it is worrisome that insecurity is rising and is taking a new dimension in Nigeria.

Ambali who was represented by the Deputy Vice-Chancellor, Research, Technology and Innovation, Prof. Gabriel Olatunji, urged security agencies to address the menace.

It would be recalled that the Boko Haram insurgents in October killed at least 17 people in a bomb blast at the Federal College of Education (FCE), in Kano State.

The police said 13 students, an infant and a lecturer were among the victims of the tragic incident.

Two days later, there was a bomb scare in Kano Polytechnic and Aminu Kano School of Legal studies  both situated in Kano, northern Nigeria.

According to reports, the incident, which occurred around 12:20pm on Friday, 19 September, 2014, caused pandemonium that resulted into students of the two tertiary institutions scampering for safety.