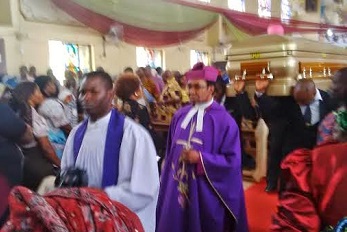 The remains Dr Ifeanyichukwu Nwobodo, the late son of a former governor of old Anambra State, Chief Jim Nwobodo, was on Tuesday laid to rest.

The deceased, who died of cancer related illness, was interred in his late uncle’s compound, John Nwobodo at Amechi Awkunanaw.

In his funeral message, the Archbishop of Enugu Anglican Ecclesiastical Province, Dr Emmanuel Chukwuma, decried the controversy that trailed the burial of the deceased.

Chukwuma said the church had done its best by according the late Nwobodo a befitting burial.

“The corpse was rejected and abandoned, but God will not abandon him. God allowed things to happen that way so that people will know the truth”, he said.

The clergy man recalled how a petition was sent to the Primate of the Church of Nigeria, Anglican Communion, His Eminence Nicholas Oko, and the inspector general of police.

He said the petition alleged that he, Chukwuma, had tried to bury the deceased without his father’s consent.

The burial was earlier slated for Dec. 5 but was put on hold following family squabbles over the burial site.

Some of the dignitaries that attended the burial included the Enugu State Deputy Governor, Rev. Ralph Nwoye, and a one-time gubernatorial candidate of Accord Party, Chief Ugochukwu Agballa. (NAN)