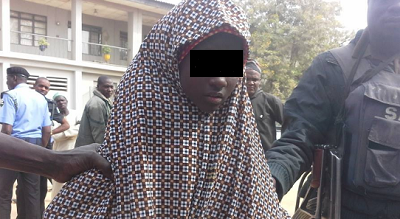 Shocking details of how a 13-year-old female suicide bomber was handed to suspected Boko Haram members by her father, to carry out mass killings in Kano, have emerged.

The girl, Zahharau Babangida, was arrested after failing to detonate her deadly suicide belt as two of her colleagues did at Kano’s Kwari textile market a fortnight ago.

Zahharau spoke to journalists Wednesday, 14 days after she was detained by the police as she sought medical help following the twin blasts by her two colleagues at the market.

You may recall that six persons, including the two suicide bombers, died in the attack, while seven others were injured, according to the police statement.

Speaking to journalists at the Kano Police headquarters Wednesday, Zahharau, the would-be third bomber, who spoke in Hausa, said she and the other girls were trained in a bush by heavily armed men who threatened to bury them alive if they refused to carry out the evil mission.

According to the girl, she and her mother were taken to the location by her own father, who handed them over to people whom she described as being of different tribes and races, including both black and Arabs.

A native of Damaturu in Yobe State, Zahharau said she and her family lived in Kano for years before she was handed over to the suspected jihadists in the bush, whom she said constantly indoctrinated her and the other girls about suicide missions.

“I was in the bush when the people… some who looks like Arabs and some huge black men, told me that did I know what is suicide mission; that is one killing himself? I said no I don’t know, they explained it to me and said that if I did plus reciting Sura Albakara I will straight go to Paradise”, Zahharau narrated.

“I declined and told them I will not do it, they now told me that they would dig a hole and bury me alive because that is what they do to all women who refuse to adhere to their demands, and they said they meant what they said, I now complied”, she narrated.

Zahharau said when she finally agreed to go on the suicide mission, she and the other two young girls were sent to Kano directly from the undisclosed training location, which she said she could not remember.

She said they were dropped at Kwari market by their guide who left them there.

“When we entered the market one among the three of us said, ‘ok let’s detonate the bombs but we should separate ourselves”, she narrated. “I still refused to follow them but because I was close to them when they blew up themselves I was injured and I quickly came to the road where I got Keke and asked him to take me to Dawanau”.

Dawanau is where Zahharau said she lived with her family.

Narrating how she was arrested after her female neighbours declined accommodating her because their husbands were away, Zahharau said the man who rode the Keke – a tricycle used for commercial transportation in most Nigerian towns and cities – asked if there was anyone to take her to hospital as she continued to bleed from the injuries she sustained.

“I was now taken to the hospital…and after arriving there the doctors were treating me when the Keke man quickly came in and asked me who was the owner of the bomb in his Keke. I said I owned it. That was how security personnel were invited and I was whisked away”, she said.

Earlier, the Kano State Commissioner of Police, Mr. Aderenle Shinaba, who addressed journalists alongside the Director State Security Service, SSS, Kano, Bassey Itang, said one of the guides of Zahharau had been arrested.

He, however, did not say what has happened to the father of the girl.

The police chief noted that the arrest of the teenager with one of her guides, now in police custody, was a great success because it led to other findings.