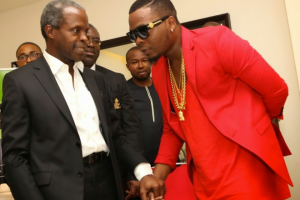 It’s now clear that current Nigerian president — Goodluck Jonathan is going to have a good run for his money when he tries to retain his seat at Aso rock.

Muhammed Buhari’s running mate in the 2015 presidential elections under the All Progressives Congress, Yemi Osinbanjo, was among the special guests at the Olamide Live In Concert which held on Sunday, December 28, 2014 at Eko Hotels and Suites in Lagos.

Relishing his experience at the very successful concert, the former Lagos Commissioner took to his Facebook page to shower encomiums on Olamide, describing him as an impressive young man.

‘I met the popular recording artist Olamide. Impressive young man. We are richly blessed with talented and energetic individuals who have a lot to offer the nation. Everyone should get involved in transforming our country. It is achievable,’ the professor wrote in the post.