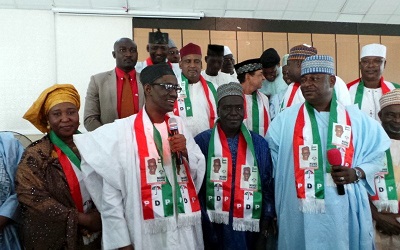 The governorship candidate of the Peoples Democratic Party in Adamawa State, Nuhu Ribadu, has unveiled a former Chairman of Ganye Local Government, Habila Istifanus, as his running mate in the February 2015 governorship election in the state.

The PDP guber flag bearer described his running mate as a man for all seasons who has the competency to assist him in bringing about fast development to the state.

“I am here to present the winning team to you. We are here to bring before you what we have been doing in the past couple of months. We hereby present to you this man of God”, he said.

Mr. Ribadu, who was accompanied by two out of the three Senatorial candidates of the party, as well as party executives, said the PDP team consists of people of proven integrity and track record who can turn around the fortune of the state.

“We promised to present to you a competent running mate that will bring rapid transformation of the state”, Mr. Ribadu said. “In the process of doing that, we moved round the state and we finally arrived at what we believed was the best team for Adamawa state”.

The former EFCC chairman pointed out that Mr. Istifanus has intimidating credentials and diligent record of service, adding that he is a man of letters, a community organizer and manager of people.

Mr. Istifanus hails from Ganye Local Government and is married with four children.