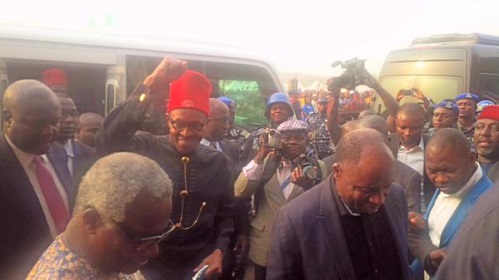 The All Progressives Congress Presidential Campaign Organisation has asked Nigerians to disregard the “utterly silly and reckless statement” credited to the “over-exuberant” Governor of Ekiti State, Ayodele Fayose to the effect that Muhammadu Buhari’s “state of health is of concern to Nigerians”.

In a statement issued in Abuja on Friday, the Campaign Organisation dismissed as “unsolicited, reckless and silly”, the allegation that former President Olusegun Obasanjo was planning an imposition of Mr. Buhari on Nigeria as he allegedly did the late President Umaru Yar’Adua while ignoring their health conditions.

“GMB is fit as a fiddle”, said Garba Shehu, the Director of Media and Publicity of the organisation. “He has no known ailment and is in excellent condition to pilot the affairs of the country”.

The statement added that Mr. Buhari is “almost a health freak”, who exercises regularly and undergoes medical examinations at regular intervals.

“On each occasion, the outcomes of those medicals have been favourable. The recent medicals he did gave him a clean bill of health”, Mr. Shehu said.

Mr. Shehu joked that “GMB is not given to curses otherwise he would have done as the late President Nnamdi Azikiwe did when a similar mischief played out over his health. Zik swore that whoever did this to him will expire before him, and they all did”.