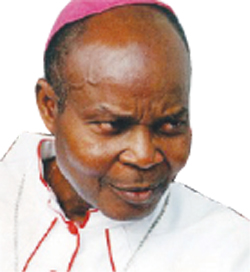 A former Catholic Archbishop of Lagos, Anthony Cardinal Okogie, on Thursday described the present government in Nigeria as clueless.

He said that the country needed an urgent rescue from what he termed “imminent brink of irredeemable destruction”.

The cleric, therefore, enjoined Nigerians to wake up from their slumber and face the reality by electing into the position of leadership only persons “who know what to do”.

He added that effort must be made to educate the average Nigerian to choose their leader based on capability and not on the basis of ethnic or religious affiliations.

The cleric made these views known while speaking in Lagos at the 11th edition of the Gani Fawehinmi Annual Lecture/Symposium, where he was the chairman of the occasion.

He decried the present prevalent insecurity in the country and the nation’s economic woes.

Okogie said, “There is extra urgency to rescue Nigeria. This is the time when every right thinking Nigerian must pray to hate the present situation strong enough such as to desire the fortitude to act right.

“This time does not allow for indifference. All must rise to save Nigeria from the brink of irredeemable destruction. This is the time we must play politics of the best, for the best position, in order to guarantee the best for our nation. Let only those with the fear of God and love of their neighbours lead Nigeria; only those who know what to do should sit at the helms of affairs. Enough of mediocrity, enough of failures, enough of nepotism, enough of ethnicity”.

Okogie, while describing the late Fawehinmi, a human rights activist and legal luminary as courageous, principled, selfless and a detribalised statesman, said he was sure that he [Fawehinmi] was now turning in his grave at the present state of the nation.